You might think that crocheting and knitting are one and the same, but in fact they use two very different techniques. One is a technique that creates stitches, using a single hook, and is called crocheting. Unlike knitting, there is no need to learn how to ‘cast off’ at the end. And each stitch in crochet is completed before moving on to the next stitch. Unlike knitting where several stitches can be open at the same time. Crocheting also tends to leave you with an end product that’s thicker than knitting with the same yarn. Another good difference is that your work will grow much quicker if you’re crocheting.

What is crochet, and where does it come from?

The process of creating fabric by interlocking loops or yarn, or thread using a hook, is called crochet. The word ‘crochet’ is actually French, and means ‘small hook’. The hook can be made from a number of different materials such as wood, plastic, or metal. 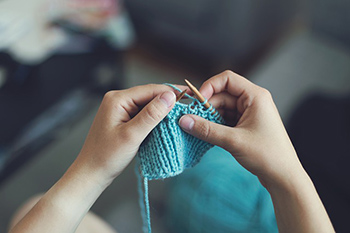 There is very little convincing evidence as to how old the art of crochet is, or in fact where it originated from. However, research does suggest it developed from Chinese needlework, and a form of embroidery that came to Europe in the 1700’s. Tambouring was its name, from the French word ‘tambour’, or drum. The technique involved stretching a background fabric on a frame. The working thread would be held underneath the fabric, while a hooked needle would be inserted downwards, so that it could draw the working thread up through the fabric. The loop would remain on the hook and be inserted a little farther along, and another loop of the working thread drawn up and worked into the first loop so that a chain stitch was formed. Tambour evolved into something the French called ‘ crochet in the air’, because the background fabric was discarded and the stitch was created on its own.

Crocheted fabric first made an appearance in Europe during the 19th century. Or at least that is the earliest substantiated evidence that has been found. A Dutch magazine, called Penélopé, published in 1823, has the first known crochet instructions, for a series of purses. Three were to be made from silk, and introduced a number of different stitches.

Crocheting was also given a boost in the early 1800s by Mlle. Riego de la Branchardiere. She was able to take old-style lace designs that were made using bobbins and needles, and turn them into user-friendly crochet patterns. These patterns were published in the growing number of pattern books, and millions of women were able to try their hand at crocheting baby blankets, and learnt how to crochet a hat, how to crochet a scarf, and many other popular garments.

The earliest references to be found relating to garments made of material that was produced by looping yarn using a hook is in ‘The Memoirs of a Highland Lady’, by Elizabeth Grant (1797-1830).

From 1842 onwards, numerous books appeared and the rise in popularity of crocheting began.

Learn how to crochet in a few simple steps

We appreciate that some of you reading this will have never encountered the art of crochet. But you may already be an expert knitter, and just looking for something new. Or you could be a complete novice and not have a clue where to start. Whoever you may be, and whatever your skill set, you can rest assured we’ll be helping everyone of you.

We don’t need to go through each and every step, even if you’re a beginner. There are plenty of sites you can visit for precise and detailed instructions on how to make the most basic stitches, for example this one, along with YouTube videos a plenty. With the most basic stitches you can easily start making some great gifts and some fun items for yourself.

Crocheting is enjoyed all over the world

Crochet is a skill that’s practiced all around the world. This has resulted in a large number of types and techniques. We read somewhere that there are more than 130 different ones, which is far too many to mention in one website. The variety is deserving of its very own book. However, we’re certain you’ll be interested in learning more about a few of them. So stay here and keep reading. 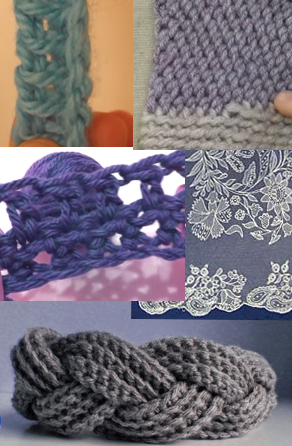 Amigurumi – A style of Japanese crocheting that is used to create small figures such as dolls and animals.

Antimacassars – This is a style of filet crochet and is most often used to create a cover that will be placed on the back or arms of furniture for protection.

Bead crochet – A technique that involves stringing beads onto the yarn before starting to crochet.

Bead-ler crochet – This method uses a special tool to add the beads after the crocheting has started.

Bosnian crochet – Possibly the oldest type of crochet known, which is made using slip stitches, worked in the back loop, with the end result being a ridge in the fabric created.

Braided crochet – This technique dates back to mid-Victorian times, and eventually evolved into Macrame crochet.

Carrickmacross lace – Part of the family of Irish lace and achieved when a fabric is crocheted to a background of net.

Elf – This type is also known as Miniature and you’ll understand why. It is the name for crochet work that is done with a really fine thread, making pieces that are 3 inches in diameter and smaller.

Finger crochet – Rather than use a wooden, metal or plastic hook, your finger becomes the tool you use to make the crochet stitches.

Tunisian – This type has a number of other names such as Afghan Stitch, Shepherd’s Knitting, Hook Knitting, or Railroad Knitting. The method involves working each row in two parts. The first part is worked from left to right, and the second half from right to left.

Crocheting has received some bad press previously, but its popularity is on the up and up. Both men, women, and children, are discovering how easy it is to make something attractive. Whether it’s something for the home, such as a table runner, or something to wear, an increasing number of people, both young and old, are joining the crochet revolution. And we hope we’ll inspire you to join us.